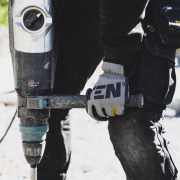 Pneumatic tools have been used to drill through rock since the 19th century. Back then, drillers would suspend themselves from a rope over a quarry face to put a drill from the right position and use small diameter holes. The process was inefficient and dangerous. It could send rocks flying and the accuracy was subject as much to luck as it was skill. After a while, drilling crews started carrying jackhammers on masts, beautiful boreholes were misaligned, the explosives that followed could be even more dangerous.

Thankfully, we live in the modern era, where down the hole (DTH) drilling has become one of the most efficient and safest methods since its invention in the mid 1950s. Let’s explore what DTH drilling is, why it’s such a successful technique, and how it might be the perfect process for your drilling operation.

What is DTH Drilling and how does it work?

DTH drilling is a drilling method that’s used to crush rock by using a drilling hammer to hit hard rock repeatedly. DTH drills are pneumatic tools that provide power by driving compressed air into a piston inside the hammer. This type of drilling has made it much easier to drill wells quickly and efficiently by allowing contractors to switch from dirt boring to rock boring simply by adding a compressor and hammer to a drill bit.

Before DTH became a widespread drilling technique, contractors would desert a dirt bore project after encountering hard rock, leaving it to a different set of drillers to continue. With DTH drilling, the same drilling team can work through multiple materials.

At its most basic level, DTH drilling involves attaching a drilling hammer to the bottom of a drill string. Small, percussive hammers are placed above the drill bit, allowing drill pipes to exert a feed force necessary to rotate the hammer and bit together with fluid (usually air, water, or mud). This actuates the hammer and flushes the cutting. Drill pipes are then added to the drill string as the hole gets deeper.

Because the air-powered piston strikes the bit directly, energy is transferred down the hole, minimizing any lost energy. This allows drilling to greater depths.

DTH Drilling is most often used in the mining industry, where blast hole drilling is necessary for projects like water well drilling, building construction, and oil and gas processes.

DTH hammers are fully fluid actuated. There are two primary parts: a valve which controls the flow and a piston that strikes the impact surface. The hammer body allows for stable, straight guidance of the bit. There are three types of hammers that depend on the actuation fluid:

What are the benefits of DTH drilling?

DTH drilling is extremely effective, which is why we’ve been using it for the past seven decades. Some of the major benefits include:

OK Bit has the DTH Drill Bits you need

If you’ve decided DTH is the right drilling method for your project, OK Bit can supply you with whatever bits you need to get the job done. If you aren’t sure if DTH drilling is the best choice or if you need help choosing a specific hammer or bit, our expert staff will be happy to help. Contact us today. 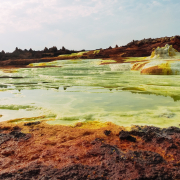 When it comes to drilling for energy sources, efficiency is the name of the game. The less energy you use to access more energy sources, the more efficient the system. This is beneficial for both financial and ecological reasons. It costs money to use energy, and wasted energy releases greenhouse gasses that pollute the planet. But what if you could harness energy that already exists beneath the surface of the planet? Geothermal energy aims to do just that. Let’s discuss the geothermal drilling process as well as its benefits.

What is Geothermal Drilling?

Geothermal energy is the heat produced deep beneath Earth’s surface in the core. It’s created naturally through geological processes. This energy exists whether we use it or not, and even if we do, it renews as geological processes continue. The only challenge is accessing it. The most useful stash of energy exists between two and twelve miles under the surface, so special drilling technology is required to reach it.

Geothermal energy isn’t new, but it’s been increasing in popularity in recent years. This is especially true in Iceland, which transformed itself over the 20th century in large part by pioneering geothermal drilling. Now, 66% of the country’s primary energy use is derived from geothermal sources. Other countries are quickly catching up. As of 2021, it accounted for only .4% of energy in the USA, but that number is increasing quickly. Many see it as a method of the future.

How Does Geothermal Energy Work?

Geothermal well drilling varies in its methods. While some wells only need to be a few hundred feet deep, some reach depths spanning several miles. The most common method for extraction, often called conventional geothermal drilling, uses hot pressurized water near the surface to produce energy. Drillers pump the water up, extract its heat, then reinject the cooled water. Unfortunately, this method only works in areas with underground pools of hot, pressurized water, and these can be hard to find. Iceland’s success is largely due to an abundance of these pools

However, there is a newer, more practical extraction method called enhanced geothermal drilling. In this process, wells extract energy from non-porous rocks. Drillers inject water into a well, force it through fractures in hot rock, and pump it out of another well to extract the heat. There are still some engineering-related problems to overcome, but it’s widely considered to be the future of geothermal drilling.

What are the Benefits of Geothermal Energy?

The Future of Geothermal Drilling

Geothermal technology is getting cheaper as technology advances. In the last forty years, the cost of running a geothermal power plant has declined by nearly 50%.  As of right now, only about 10% of the Earth’s surface is fit for power production, but as enhanced geothermal drilling becomes more widely available, this will continue to make geothermal energy more accessible and affordable.

The potential is incredible. The amount of heat that exists within 10,000 meters of Earth’s surface contains a mind-boggling 50,000 times more energy than all oil and natural gas resources in the world, combined. It’s waiting to be used. By investing in geothermal energy now, you can be a part of a cleaner, more affordable, more renewable, and more reliable energy source than traditional fossil fuels.

Is Geothermal Energy Right for Your Project?

Whether you’re an industrial driller looking to improve or replace your bits or a DIY enthusiast looking to create a geothermal well for your home, OK Bit has the drill bits you need. If you have questions about your specific project or about geothermal drilling as a whole, our experts will be happy to answer any questions you may have.  Contact us today to get started.

We are very excited to announce the launch of our new website.